We’d all like our trees to be lush, green, and healthy throughout the entire northern Virginia growing season. But, unfortunately, there are several common tree pests that love your trees as much as you do – and that’s not good for your trees!

In this article, we cover 4 common insect pests that damage trees in Fairfax County, Arlington County, and surrounding areas, as well as two new ones to watch out for (it’s just a matter of time until they arrive in our area).

This brilliant, metallic-green beetle was accidentally introduced into North America from Asia in 2002. It is now one of the most destructive non-native insects in the U.S. and is spreading rapidly. Northern Virginia is under a federal quarantine for EAB – no regulated items (such as firewood) can be moved outside the area.

Emerald ash borer infests all species of ash trees and affects both healthy and weakened trees of all sizes.

The adult beetle lays eggs in the tree bark. When the eggs hatch, the larvae burrow beneath the bark and feed on the vascular tissue, disrupting the tree’s ability to transport water and nutrients from the roots to the canopy.

EAB-infested ash trees often show symptoms similar to those caused by other ash pests or diseases. Crown dieback, for example, could be from EAB damage, or be the result of drought stress, soil compaction or verticillium wilt, to name a few.

Typical signs of attack by these boring insects include:

Typically in the third year after infestation, the tree will exhibit significant dieback. At that point, treatment options will not be effective. By the end of the 4th year, the tree will likely be dead – EAB infestation is almost always fatal without early treatment.

Treatment with a systemic insecticide injected into the tree can be effective if done before more than 30% of the tree shows signs of damage. It’s best done when the adult EAB beetles emerge in May through the end of August. Summer treatments are best applied in the morning when temperatures are cooler and the tree is better able to take up the insecticide.

More information and resources about EAB in Fairfax County >> The gypsy moth is a small nondescript moth that’s usually active for a short period of time in mid to late July. It’s not the moth we need to worry about though – it’s the caterpillars.

The hairy gypsy moth caterpillars have a double row of blue and red dots down their back. They’re well-known for hanging from trees by thin silk threads, getting in your hair and on your clothes whenever you walk under a tree.

The female gypsy moth lays eggs in a mass of up to 1,000 eggs that hatch into caterpillars in late April to early May. The caterpillars climb up into nearby trees and start eating – and eating and eating …

A healthy tree can usually survive being defoliated once in a season. It’ll generally grow back most of its leaves before fall, although it may look a little sparse. But older or stressed trees (such as during a drought) will have difficulty regenerating leaves, may become vulnerable to attack by other insects or diseases, and may not have the stored energy needed to survive through the winter.

After two or three consecutive years of defoliation, even the healthiest tree will probably die.

Prevention focuses on two things – preventing eggs from hatching and preventing caterpillars from reaching the tree canopy where they feed. Starting in mid-July (when the female lays her eggs), search for egg masses on tree trunks and sheltered areas. Scrape them off surfaces and destroy them (such as by drowning them in soapy water – just leaving them on the ground won’t kill them). To prevent caterpillars from climbing tree trunks, you can place a sticky band or folded piece of burlap around the trunk to trap caterpillars as they climb. Aphids are small, soft-bodied insects that suck the sap from plant leaves, twigs, and stems. They occur in a range of colors, including yellow, orange, green, and black.

There are dozens of aphid species in northern Virginia affecting most shade trees and shrubs, as well as ornamental landscape plants. Some aphid species can even be found on conifers.

When feeding, aphids excrete honeydew, a sweet, sticky liquid that’s attractive to ants and even bees and wasps. Many homeowners think the tree is “bleeding” sap when it’s really just honeydew produced by aphids.

Honeydew is also prone to developing sooty mold, a fungus that covers surfaces with a grey, powdery coating. It doesn’t really harm the tree although it may reduce photosynthesis (and therefore decrease tree growth and vigor) if it coats most of the leaf surfaces on the tree.

While damage is mostly cosmetic, a widespread aphid infestation can sometimes affect plant health. If you notice leaves starting to curl on a plant with aphids, it’s generally a sign that treatment is needed.

In many cases, nature takes care of the problem; aphids have many natural predators, such as lady beetles, that have voracious appetites. For small trees or shrubs, a strong blast of water from a garden hose may be all that’s needed to knock aphids off the plant (they’re unable to climb back onto the plant) and remove honeydew and sooty mold. If that’s not enough, smaller trees and shrubs can also be sprayed with insecticidal soap.

For larger trees, a systemic insecticide may be needed (the insecticide is taken up by the tree and spread to all branches and leaves). This is the best option if leaves are curling. 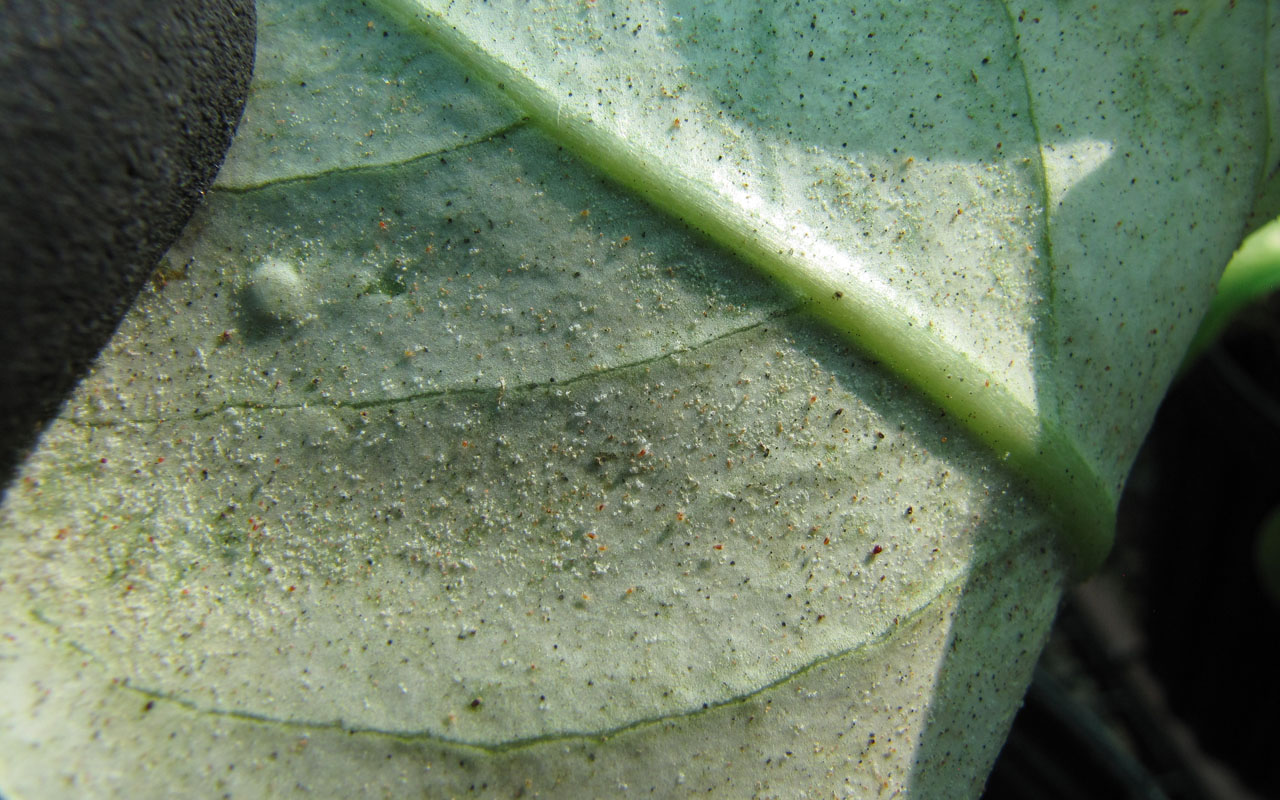 Although we call them “spider” mites, they’re not actually spiders. Spider mites are arachnids, similar to spiders, ticks, and daddy longlegs but much, much smaller. In fact, they’re so small (up to 1/20”) that they’re often difficult to see without a magnifying glass. They come in a range of colors, from red to brown, yellow, and green, depending on the species and time of year.

With so many types of spider mite present in northern Virginia, there are very few plants that aren’t attacked by spider mites at some point.

Spider mites prefer hot, dry conditions so are often most prevalent in summer (particularly during drought conditions). They use their sharp mouthparts to rasp away the leaf surface so they can feed on sap. This causes the telltale stippling (tiny yellowish or bleached spots) seen on infested plants. You may also see tiny spider webs, particularly near stem crotches and where leaves attach to the stem.

As damage progresses, leaves start to yellow or take on a pale bronze hue, develop brown or dried edges, and eventually die. A serious infestation can kill a smaller plant, although it’s unlikely to kill a previously-healthy tree.

Healthy, well-watered plants are less likely to attract spider mites (remember, they like hot, dry conditions). Here’s a quick guide to watering trees during the summer. Regularly hosing down susceptible plants with water from a garden hose can help keep these pests from gaining a foothold by creating a more humid environment and removing dust that can shelter the mites. For particularly bad infestations, a miticide can be injected into the surrounding soil or sprayed on the tree.

Insecticides have no effect in spider mites (they’re not insects) and can make the situation worse by killing other, beneficial insects.

Two New Pests to Watch For This invasive plant hopper was inadvertently introduced into Pennsylvania in 2014 and is spreading rapidly. As of mid-2020, it hasn’t yet been found in Fairfax or Arlington counties, but populations have been found City of Winchester and Frederick County, Virginia.

The spotted lanternfly feeds on more than 70 types of plants including crops such as apples, grapes, hops, and walnuts, and other hardwood trees. Its preferred host is the invasive Ailanthus tree, commonly known as the tree-of-heaven

Unlike aphids, spotted lanternflies large insects (adults are up to an inch long), highly mobile, and can damage many more plants on a far larger scale than the tiny aphids. These tree pests also congregate in large numbers, sometimes completely covering trees and even buildings!

Visit this website to learn what to look out for. If you see one, take a photo and then kill it (if possible). Then report sightings to the county by calling 703-324-1170 (ext. 711) or by emailing pestmail@fairfaxcounty.gov. 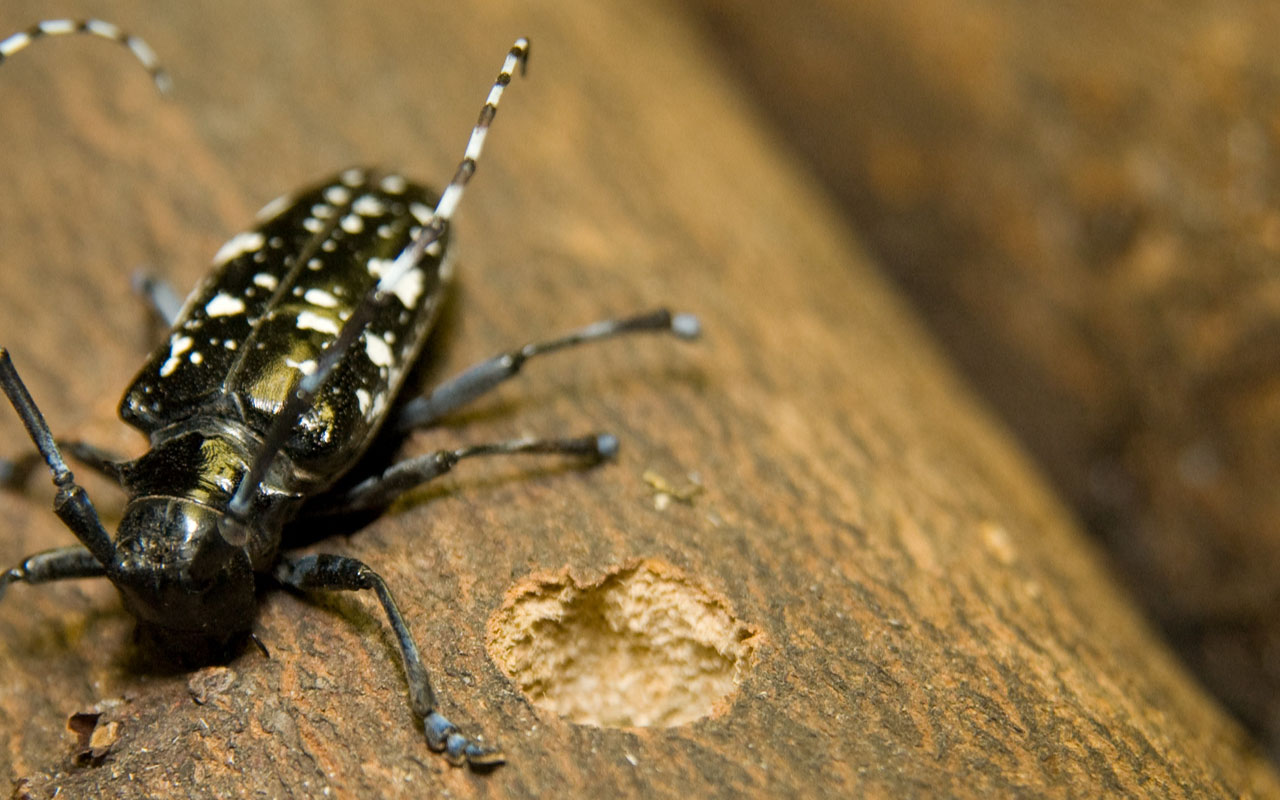 Another accidentally-introduced insect, the Asian Longhorned Beetle (ALB) is one of the most serious and destructive tree pests to strike North America. It’s a large (1 – 1.5″) black beetle with white spots and extremely long antennae.

So far, this insect has not been found in Fairfax County and we hope to keep it that way! It’s mostly found in colder areas of the northeast but was recently found in Hollywood, SC.

There are some distinctive indications of ALB infestation, including:

If you find an ALB infestation, or suspect these beetles may be attacking your trees, the county recommends you do the following: